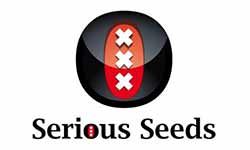 Seriosa by Serious Seeds is the latest genetic marvel to join the lofty all-star lineup of incredible cannabis genetics from Serious Seeds.

Seriosa by Serious Seeds is one of the new strains to join the impressive roster of strains at Serious Seeds. Seriosa is the resulting progeny from crossing a specially selected phenotype of the AK-47 with Simon of Serious Seed's favourite pheno of their Serious Mimosa. Most phenotypes in these seeds form a stacked cola-style growth and will have one main stem with a few scattered shorter side branches on the low knots. The Mimosa leaning phenotype has a plant structure where buds group across the main stem with other buds opposite other buds on the main stem, with the central bud being the largest by far. The Ak-47 leaning phenotypes generally are clear as they produced massive buds, as can typically be found in winning AK-47 phenotypes. The AK-47 pheno tends to be found in pheno hunts more frequently when popping the regular seeds compared to the feminised.

Seriosa's buds express heavy resin production leading to a shining smattering of trichomes that easily extends to the leaves protruding from the central bud. The AK-47 leaning plants represent classic AK-47 characteristics, such as the elongated and hefty, enormous buds. Seriosa's flowering period is generally eight weeks, with some plants flowering in an even shorter time. In late flower, more than half the phenotypes will begin to show their beautiful colouration, with hints of lilac and purple spreading across the leaves & the tops. Fluctuations in the temperature don't cause these exotic-looking colourations; instead, they occur simply as part of the latter stage of flowering these phenos as they ripen. The deeply exotic colouration appears more prominent in feminised rather than regular seeds.

Seriosa plants are extremely high in THC & contain only trace amounts of CBD. The Mimosa leaning phenotypes express a rich, funky orange flavour that perfectly embodies a freshly ripened orange tree. In contrast, the AK-47 leaning plants produce a spicy yet sweet terp profile and aroma. Varying phenotypes will express differing positions along this spectrum, with some perfectly blending the characteristics of the parents.